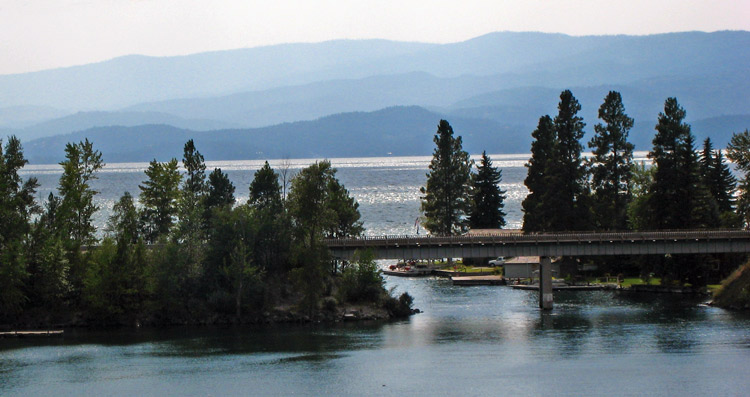 Bigfork, Montana is one of the hidden treasures of the Rocky Mountains. The village is sequestered along a picturesque bay in a remote corner of the West's largest fresh-water lake. A luxuriant pine forest shelters the town, and slopes along the shore to the south are covered with fruit orchards. Mountains rise precipitously eastward to glacier-dotted peaks.

Bigfork was a tiny crossroad until the 1970s when the long-overdue "discovery" of one of the West's great leisure sites began. By 1985, with an area population of only 1,800, it was a charming but relatively unknown village with a stellar geographic setting full of recreation opportunities, plus a coterie of art galleries, thriving downtown theatrical playhouse, and a surprising number of high quality gourmet restaurants. These charms led to Bigfork's inclusion in in the premier guidebook in this series, The Great Towns of The West, even though it was one of the smallest of the great towns.

Today, the little main street still has a picture-postcard appeal, with a flower-bordered lineup of rustic Western-style buildings housing sophisticated art galleries, gourmet food shops and restaurants, a well-regarded summer theater and saloons with beguiling Old West decor. Every imaginable lake and river-oriented recreation can be enjoyed in town, along with all sorts of alpine activities in the adjacent mountains. Lodgings remain relatively scarce, but uniformly distinctive. Three of the best places overlook Flathead Lake, and choices include lovely cottages and bed-and-breakfasts reflecting Montana style and hospitality. High season is June into September. Rates are usually reduced as much as 40% (or more) at other times.